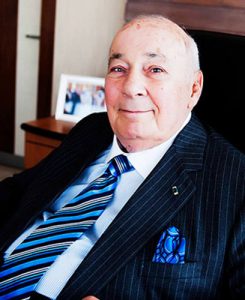 Our former Chairman, the late Hatim Sharif Zu’bi received an LLB. Hons. Degree from University College, London in 1949, and was the President of his university’s Law Society from 1948-49. He was called as Barrister-at-Law by Lincoln’s Inn in 1950. He has been at various times Licensed Advocate & Legal Consultant in Jordan, Bahrain, U.A.E., Oman, Qatar and Saudi Arabia since 1971

From 1950 to 1954 he was Advocate for Ministry of Finance in Jeddah and Dammam, Saudi Arabia and from 1954 to 1955 he was Special Counsel to US Aid Mission, Jordan.

From 1965 to 1969, he was Minister of National Economy, Minister of Finance, Acting Minister of Foreign Affairs, and served as Jordan’s Governor at the World Bank.

In 1971 he became the Chairman and Founder of Hatim S Zu’bi Law Office, Practicing under the firm name “Al Mahmood and Zu’bi”, now Zu’bi & Partners, Attorneys & Legal Consultants, Bahrain (including Hatim S Zu’bi & Partners and Qays H. Zu’bi Law Office in Bahrain). His initial law practices were based in Abu Dhabi and Bahrain, and from 1973 onwards expanded into Oman, and Qatar.

The late Hatim Sharif Zu’bi held several Western and Arab high decorations. He was a Fellow of the Chartered Institute of Arbitrators in England and a member of the ICC Court of International Arbitration and Editorial Advisory Board of the Construction Law Review.