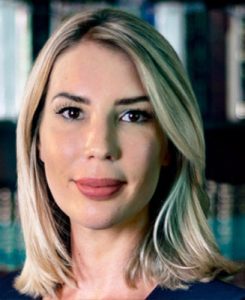 Eleanor has joined the firm in April 2018 as a Solicitor. She is a French-Australian solicitor, holding a BA/LL.B. (Hons) from the University of Melbourne and a Masters in International Relations from the Institut d’études politiques de Paris (Sciences Po).

Eleanor was admitted as a Solicitor to the Supreme Court of Victoria, Australia in 2013, having already acted as a trainee at Minter Ellison (Melbourne, Australia), a volunteer legal adviser at Fitzroy Legal Service (Melbourne, Australia), an intern on the Karadzic trial at the United Nations International Criminal Tribunal for the Former Yugoslavia (The Hague, Netherlands) and a paralegal at Dentons Paris (formerly Salans & Associates) in their international arbitration group.

After admission she became a Judge’s Associate in Australia for both Civil and Criminal jurisdictions, before moving back to Paris in 2015 to work as a consultant for UNESCO.

Eleanor is fluent in English, and French